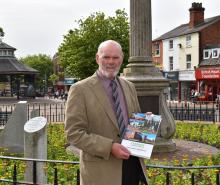 Cannock is on the cusp of transformational change, the catalyst of which is the £160m McArthurGlen Designer Outlet due to open in 2020. The Outlet is set to attract up to 4 million people per year which will present a unique opportunity for the neighbouring Cannock town centre to benefit from the increased visitor numbers.

The Prospectus has been jointly funded by the Council, Staffordshire County Council and the Greater Birmingham & Solihull Local Enterprise Partnership (GBSLEP). The Prospectus will be used as a marketing tool to attract new investment to identified Council owned sites within Cannock town centre with potential for redevelopment.

The long term vision for Cannock town centre is to create a Culture & Leisure Hub. The Council would like to see an upgraded Prince of Wales Theatre, a series of high quality cafés and restaurants in the town centre, a new cinema complex, a hotel and a series of successful independent retailers complimenting the established franchise retail offer.

The Council would like to engage with private sector investors and developers who are interested in hearing more about the available opportunities which are spread across nine town centre sites.

“It is important that we maximise the benefits of the McArthurGlen Designer Outlet Cannock, with its anticipated millions of visitors into the District, and to link this with the town centre.

“Now the Prospectus has been approved, officers can start to engage with private sector investors and developers both locally and regionally and progress a launch event planned for October this year.”