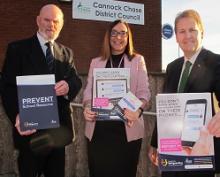 A new campaign addressing extremism and radicalisation is launching in schools across the District this week as part of the Cannock Chase Council’s safeguarding work.

The Council’s Community Safety Team has commissioned Loudmouth Education & Training to create and deliver a brand new theatre in education programme on extremism to students in Year 8 and 9. The programme will consist of a 30 minute piece of interactive drama followed by workshops. The workshops will use the drama to encourage further discussions in a safe environment.

The aim of the campaign is to ensure young people have an increased awareness and understanding of what extremism is and the wider Prevent agenda as well as encouraging people to report their concerns and make a referral to the relevant agency.

Resource packs are being distributed to primary and secondary schools providing information about local support services, details about the Prevent agenda and campaign material.

Campaign messages will also be promoted further using the Council’s housing and refuse vehicles, posters displayed in key locations across the District and online advertising via the Council’s website and social media platforms.

This forms part of the Council’s wider safeguarding campaign. ‘See something, Say something’, which was launched last year and aims to encourage people to report any concerns they may have about an individual or group.

Cllr George Adamson, Leader of Cannock Chase Council, said: “The Council is committed to ensuring people are aware of the signs of extremism and the associated factors as well as making sure people report any concerns they may have about an individual or group.

“This is the first time the Partnership team has secured this level of external funding for a campaign which will help raise the profile of the Prevent agenda and risks of extremism. It is hoped that if it is successful it could be rolled out to other schools across Staffordshire.

“If you have concerns about someone becoming involved in extremism, report it by calling 01785 232054”.

Staffordshire Commissioner for Police, Fire and Rescue and Crime, Matthew Ellis said: “Through the Proceeds of Crime Act, police are able to seize the ill-gotten gains of criminals and use them to make a real difference to our communities.

“I decided to use the fund to support this important educational resource, which aims to raise young people’s awareness of extremism, as well as the help that is there for them if they have any concerns”.

Eleanor Vale, Company Director of Loudmouth Education & Training “We are so excited to be involved in this pilot project and can’t wait to get out into the schools with this brand new piece of drama”.

Gill Heath, Cabinet Member for Communities at Staffordshire County Council said: “Keeping young people safe remains one of our top priorities and we work closely with our partners to do this.  This includes working with schools to raise awareness and to give young people the information and tools to keep themselves safe from the dangers of radicalisation.

“We know that theatre can be a great way of getting messages through to young people and we are keen to see the positive results from the project, which could then be used to benefit other young people around the county.”

Sergeant Calum Forsyth, Prevent Coordinator from Staffordshire Police, said: “Using theatre is an innovative way of raising awareness of extremism to children and the signs to look out for and one which we fully support. The sessions will give the youngsters a chance to talk around any concerns they may have in a safe environment and explain what Prevent is and how it works”.

For further information about this campaign contact the Community Safety team on 01543 464387 or visit our safeguarding web pages.